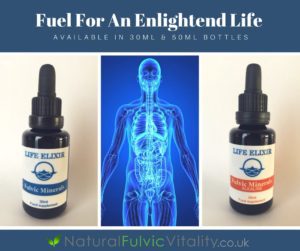 It’s no secret that the organic acids in fruits and vegetables are simultaneously nourishing and detoxifying. Life Elixir contains an abundance of these acids from prehistoric plant matter decomposition. The acids also participate in the delivery of the nutrients contained in the respective foods.

There is not a single fruit or vegetable that contains all the organic acids that Life Elixir does!

Life Elixir contains Nature’s most unique and complex molecules in the form of organic acids, minerals, trace minerals, amino acids and vitamins. This gives Life Elixir a host of ways to impart health producing effects via its many constituents. By increasing the permeability of the cell membrane the organic acids in Life Elixir link to nutrients in the digestive tract and blood stream delivering them into the cell at an increased and more effective rate. This results in a noticeable sense of well being and reduced susceptibility to disease. Energy levels increase while endurance and stamina is enhanced considerably.

What is the difference between Fulvic acid and a fulvic acid bound mineral?

In nature, fulvic acid exists in two forms. The first is fulvic acid that is in the free form state remaining unbound to other molecules such as minerals, it is extremely reactive. The second is fulvic acid that is bound to minerals called fulvates often referred to as Fulvic Minerals. Life Elixir contains an abundance of both these fulvic forms!!

What about other organic acids?

Results of a research study in Japan suggest that acetic acid may help control blood pressure and fat accumulation. Investigators in Europe looked at the influence of sodium acetate and acetic acid on blood glucose and other biological responses to a mixed meal in healthy subjects.

In the United States, the National Heart, Lung, and Blood Institute and the National Center for Complementary and Available medications containing acetic acid have been approved by the FDA to treat infections of the outer ear canal, bacterial vaginitis, head lice and ear wax impaction. Mayo Clinic.com recommends acetic acid for conditions ranging from acetic drops for ear infections to diluted vinegar for thrush, plantar warts, nail fungus and impetigo.

Production of lactic acid in the body stimulates the production of glucose and glycogen in the liver resulting in more energy. Both these molecules are important sources of energy for the body. Once lactic acid is released in the exercise schedule, the body spends extra calories for its absorption. Lactic acid helps in quick use of dietary carbohydrates, thus increasing calorie burn. It is very helpful in reducing body weight. Lactic acid helps to stimulate the release of growth hormone from the pituitary gland. It thus helps in increased physical growth. Once the released lactic acid is absorbed the body, gradually the body improves at processing and utilizing this fuel. In succeeding workout sessions, the metabolism of the body becomes better. After the absorption of this released lactic acid, the body muscles gain strength and the overall aerobic capacity of the body is enhanced.

Lactic acid released in the body stimulates the endocrine system. This results in more production of natural anti-aging serum that helps to prevent the body against the withering effects of aging. The net result is a younger skin and healthy body.

As the duration of exercising with lactic acid increases, you tolerance and stamina for strenuous exercising schedule also increases.

The salts and esters of malic acid are known as malates. The malate anion is an intermediate in the citric acid cycle. In the C4 carbon fixation process, malate is a source of CO2 in the Calvin cycle. In the citric acid cycle, (S)-malate is an intermediate, formed by the addition of an -OH group on the si face of fumarate. Malic acid occurs naturally in all fruits and many vegetables, and is generated in fruit metabolism.

One of the most commonly touted benefits of malic acid is its ability to help reduce pain. Although malic acid takes several days of consistent consumption for the supplement to take full effect, it can start to reduce pain as quickly as 48 hours after the first supplement.

Malic acid helps boost energy levels and is an essential component in the Krebs cycle, a process that turns carbohydrates, proteins and fats into energy and water in the body. If there isn’t an adequate supply of malic acid in the body, the Krebs cycle can’t function properly, leading to fatigue. Malic acid is typically used to improve sports performance when taken in supplement form.

When applied to the skin, malic acid is used to remove dead skin cells, reduce signs of aging — including wrinkles — aid in the treatment of acne and promote the production of collagen, a type of protein that serves as a major component of the skin.

Succinic acid is used in the food and beverage industry, primarily as an acidity regulator. It is also sold as a food  additive and dietary supplement, and is generally recognized as safe for those uses by the U.S. Food and Drug  Administration. Succinic Acid (also called Amber Acid) has been used in Europe as a natural antibiotic and general curative for centuries. Succinic acid makes up a large part of natural Baltic amber. Succinic Acid is also a natural constituent of plant and animal tissues. A powerful anti oxidant that helps fight toxic free radicals and disruptions of the cardiac rhythm, succinic acid has been shown to stimulate neural system recovery and bolster the immune system, and helps compensate for energy drain in the body and brain, boosting awareness, concentration and reflexes, and reducing stress.

Caffeic acid has a variety of potential pharmacological effects in in vitro studies and in animal models, and inhibitory effect of caffeic acid on cancer cell proliferation by oxidative mechanism in human HT-1080 fibro sarcoma cell line has recently been established.

Another study published in the March 2006 issue of the journal “Toxicological Sciences” states that gallic acid possesses significant anti-inflammatory properties and prevents the expression of inflammatory chemicals including cytokines and histamines. The researchers of the study state that gallic acid may be used to treat inflammatory allergic diseases.

Certain animal studies, such as the one published in the May 2010 issue of the “Journal of Pharmacy and Pharmacology,” indicate that gallic acid possesses significant antioxidant activity and may protect the liver from the harmful effects of free radicals that are formed as a result of various metabolic processes in the body.

Gallic acid may also benefit diabetes patients by triggering the release of insulin by the pancreatic cells, says a study published in the January 2010 issue of the “Phytothreapy Research.” However, they may not replace your existing diabetes medications, and do not use them without consulting your doctor.

Fungi, especially Aspergillus flavus and A. parasiticus, produce a harmful toxin known as aflatoxin that can contaminate foods such as nuts, peanuts, corn, wheat and cottonseed. However, gallic acid has the ability to inhibit the enzymes responsible for the production of aflatoxin by the fungi, says the U.S. Department of Agriculture, and may thereby help develop an environmentally friendly way to deal with aflatoxin.

Cinnamic acid, a naturally occurring aromatic fatty acid of low toxicity, has a long history of human exposure. We now show that Cinnamic acid induces cytostasis and a reversal of malignant properties of human tumor cells in vitro. The concentration causing a 50% reduction of cell proliferation (IC50) ranged from 1 to 4.5 mM in glioblastoma, melanoma, prostate and lung carcinoma cells. Using melanoma cells as a model, we found that cinnamic acid induces cell differentiation as evidenced by morphological changes and increased melanin production. Moreover, treated cells had reduced invasive capacity associated with modulation of expression of genes implicated in tumor metastasis (collagenase type IV, and tissue inhibitor metalloproteinase 2) and immunogenicity (HLA-A3, class-I major histocompatibility antigen). Further molecular analysis indicated that the anti-tumor activity of cinnamic acid may be due in part to the inhibition of protein Isoprenylation known to block mitogenic signal transduction. The results presented here identify cinnamic acid as a new member of the aromatic fatty acid class of differentiation-inducers with potential use in cancer intervention

The natural organic acids contained in Life Elixir result from the microbial breakdown of plant matter containing organic acids and can be found in fruits and vegetables. The subsequent decay and depositing of the plant matter on the  surface of the Earth also produced additional organic acids. This process continued for 34 million years eventually forming rich deposits of fulvic minerals along with these organic acids.

Fruit acids and vegetable acids are beneficial only in their organic forms or as acid salts. The artificially prepared acids, sold in soft drinks and in other man made forms, never produce the beneficial effects that one obtains from the organic origin acids. *

The combined organic acids or salts consumed in food are generally changed in the body into alkaline carbonates, thereby increasing the alkalinity of the blood and secretions. The uncombined acids either form alkaline carbonates, or are oxidized into carbon dioxide and water.

Conclusion: Life Elixir is a powerful body alkalizing substance with a rich organic acid content that cannot be found in any one or combination of fruit or vegetables. 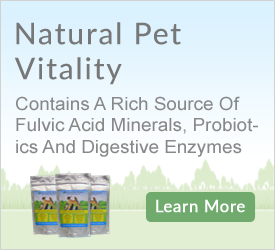